A 30,000 sqm food and beverage precinct Is opening in Moorabbin’s Ex-cigarette factory

Retail regeneration is a work of art

A window into our history

Addy on the move

Melbourne property developer, Up Property, further cements its commitment to the Geelong area with the regeneration and full tenancy of another retail building located at 107-123 High Street, Belmont.

The 3,200 square metre site is now fully leased after just three months, following the complete refurbishment of the run-down retail showroom by Up Property since settlement in February 2019. This includes the negotiation of three new leases with The Butcher Club, Best Indian Grocer and Australian Luggage Company prior to settlement, along with the resigning of existing tenant The Bicycle Centre for a further five-year term.

The finalisation of the project was recently celebrated with the instalment of a large piece of artwork by well-known Australian artist and Geelong local, Buff Diss, on its north-facing wall. With his unique artwork showcased in locations across the world, Buff Diss has created an incredible piece for the retail building using the medium of tape, which mirrors the terrain of the local area. 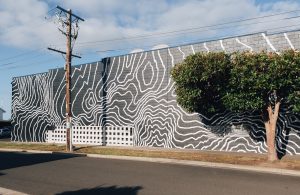 Visible to drivers travelling from the south via the city, the project finalises the site and marks the regeneration of High Street and the fourth commercial site transformed by Up Property in Geelong.

Responsible for the refresh of a number of other office and retail buildings, including 126-128 Little Malop Street, the historic pub turned popular gathering ground, The Inn Hotel, and the Belcher Arcade, activated as part of the Renew Geelong initiative, Up Property are passionate about increasing the standard of presentation of properties within the area.

“We purchased our first property in Geelong back in 2004 and since then have been heavily invested within the local area. Through the revival of each of our developments, we are working to further breathe life into the Geelong community,” said Managing Director of Up Property, Adam Davidson.

“When we are looking for new projects, we seek to identify sites that have hidden potential that other’s may not see and work to develop and transform them into a landmark or community hub for the region. For High Street, we wanted to create something of meaning for the local community which is why we got Buff Diss on board. His amazing mural has lifted the visual street appeal of the asset and provided a piece of artwork that visitors and the Geelong community can enjoy.”

All tenants are now fully operational as of this month, including businesses found in larger shopping centres, such as The Butcher Club and Australian Luggage Company. The agreements support the trend of tenants choosing to move into local shopping strips for more affordable rentals and greater floorspace.