A 30,000 sqm food and beverage precinct Is opening in Moorabbin’s Ex-cigarette factory

Retail regeneration is a work of art

A window into our history

Addy on the move 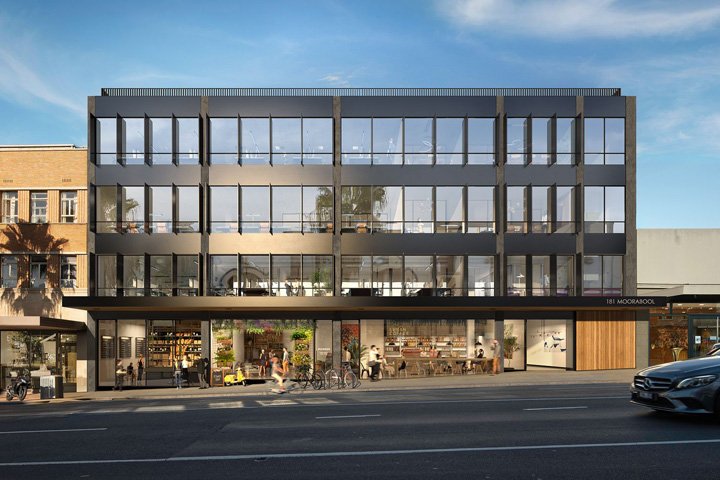 Melbourne property developer and investment company, Up Property, has today revealed plans for a new striking five level office building. Its latest Geelong project at 181 Moorabool Street, is situated in the heart of the city’s thriving CBD.

Previously known as the Belcher Arcade, the plans reveal affordable and flexible leasing opportunities ranging from 74 square metres to 2,884 square metres, with three street-facing retail tenancies below four levels of commercial office spaces. This includes a premium rooftop tenancy on the fifth floor, which will feature an expansive west-facing 121 square metre outdoor entertaining terrace with breathtaking views over Geelong’s CBD towards Corio Bay.
The building will soon become a striking addition to the busy street, architecturally designed by Genton to have a strong focus on energy efficiency to a 4.5-star NABERS (National Australian Built Environment Rating System) specification, with a bold architectural form blended with minimalist exterior embellishments.
With an inviting exterior and bold architectural accents, retail assets will have maximum visibility and flexible fit outs to accommodate a range of retail offerings. Tenancies include an abundance of natural light from multiple aspects and streetscape views, complete with generous ceiling heights of up to 3.1 metres, 20 car spaces, bicycle parking options and close proximity to public transport to make for enticing future office spaces.
With a population growth rate of 2.6 per cent*, Geelong is widely known as a metropolis on the move. 181 Moorabool Street is set to meet the growing demand for quality office spaces within Geelong and further cements Up Property’s commitment to the regeneration of this ever-growing region.

“With the Geelong Flyer ferry set to launch later this year and $2 billion pledged by the Federal Government for the Fast Train link to connect Geelong with Melbourne, demand for retail and office spaces within Geelong is growing,” said De Stefano.

“Anything new and affordable within the Geelong area is being snapped up really fast, making properties such as 181 Moorabool Street extremely popular. Up Property’s plans to transform the building will not only create additional opportunities for growing professional services firms within Geelong, but will help increase the vibrancy of the street and the surrounding area,” he added.

Since purchasing its first property in Geelong back in 2004, Up Property has been heavily invested in the local area and recently completed the regeneration of a number of other office and retail buildings. These include 126-128 Little Malop Street, the new home of the Geelong Advertiser and Barwon Health, the historic pub turned popular gathering ground, The Inn Hotel, the recent refurbishment and transformation of retail showrooms at 107-123 High Street and the former 6.2-hectare CSIRO site in Belmont which is set to be transformed into a residential community.

“We are really excited to release our plans for 181 Moorabool Street and to be involved in the transformation of yet another location within Geelong. Over the past 10 years, we have seen so much potential in the Geelong area and have deliberately sought out compelling locations that have upside potential. Through each and every development we are working to further breathe life into the Geelong community and believe 181 Moorabool Street will be no exception, helping to provide premium, yet affordable tenancies to Geelong’s growing professional population,” said Up Property’s Managing Director, Adam Davidson.
As part of the Renew Geelong initiative – a not-for-profit social enterprise funded by the City of Greater Geelong and the Victorian Government – Up Property activated 181 Moorabool Street, allowing local artists and creatives to feature within the space whilst plans were being finalised.

Office and retail space at the exciting new 181 Moorabool Street development are available for lease now, with construction proposed to commence late 2019. The development is located just one hour and 15 minutes to Melbourne by car and 52 minutes by train, with this time set to be made even faster in coming months with the launch of the new Geelong Flyer ferry and Fast Train link.
For further information on the plans for 181 Moorabool Street, to enquire about tenant opportunities or to register your interest visit, 181moorabool.com.au.